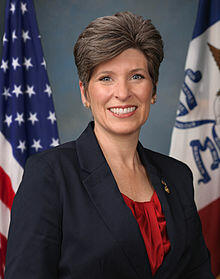 WASHINGTON, DC - Iowa Republican Senator Joni Ernst has sent a letter to the Department of Justice about allegations of federal rights violations at the Glenwood Resource Center and the Woodward Resource Center.

The letter sent Thursday to Attorney General William Barr asked when did the Department of Justice first became aware of an increase in reported deaths at the Glenwood Resource Center.

Ernst is a member of the Senate Judiciary Committee. She's requesting regular updates on the status of DOJ's investigation.

She noted Glenwood Resource Center has a history of disturbing mistreatment of its residents.

The letter's full text is below:

I write regarding the Department of Justice investigation into disturbing reports of potential systematic violations of the federal rights of individuals with disabilities at the Glenwood Resource Center (GRC) and Woodward Resource Center (WRC) in Iowa.

I request that you use the full extent of your authority under the Civil Rights of Institutionalized Persons Act and Title H of the Americans with Disabilities Act to conduct a thorough investigation of these reports and determine any possible violations of the law.

I appreciate the Department’s attention to this situation; however, I am also concerned by the delay in initiating this course of action. As you are aware, it has been reported that 14 severely disabled residents of the Glenwood Resource Center died between June 2018 and April 2019, and three additional deaths have been reported within just the past two months. I respectfully request your response to the following questions:

It is the duty of the federal government and elected officials to protect the health and safety of our most vulnerable citizens. These troubling reports will be of upmost concern to communities across Iowa and particularly to the residents of these centers, their families, and their loved ones.

I will be closely monitoring this situation and the Department’s ongoing investigation. To the extent possible, I also request that you provide consistent updates to my office on the status of this investigation. All those who may have been impacted by this situation will be looking to the Department to provide clear and concise information in order to ensure an immediate and proper response.