Let me tell you, it's about a number of things, but the primary thing it's about is that Trump didn't tell anybody before he was gonna do it. No leaders in the House, no leaders in the Senate. He just announced it and everybody wakes up says, "What? He didn't confide in us. He didn't consult us." And there's already animosity towards Trump from a lot of people that don't like him being an outsider, so it's just another avenue to go at the guy for being unqualified.

The Republicans that joined in this thing are just typical inside-the-Beltway types who follow the conventional wisdom and then get behind it so that they can benefit from any tailwind rather than trying to be any kind of a headwind. It's so predictable. And of course, folks, for later in the program -- I'm not gonna start with this today 'cause I've got some other things I want to get to first -- but there's another just fabulous piece by our old buddy Angelo Codevilla.

Remember the piece from years ago in theAmerican Spectator that basically defined Washington as the ruling class and everybody outside it as the country class. And first pointed out the obvious characteristics of the ruling class, that they are for themselves first and America second. And maybe America first, depending on what they want America to be. It was a fabulous piece. We spent numerous days on it, adding to it, analyzing it and praising it.

And Mr. Codevilla is back with a piece at American Greatness that was published a couple days ago called,"Who the Hell Do They Think They Are?” And it's about this military business. In fact, one of the reasons that it so appeals to me is that it builds on a point that I was making, have made a number of times about how war is a never-ending thing because of the profit in it, because of the money in it.

And that's another thing about Syria. Trump is getting us out of foreign wars, and the entire military-Washington complex wants no part of that! These people's personal fortunes are tied up in ongoing war. Their power base is tied up in ongoing war. Military defense contractors are tied up in war. The last thing anybody -- you know, the Democrats run around and traditionally they’ve been the anti-war party, but notice when they get elected they never get us out of any war. They always ramp 'em up and expand 'em.

Look at Obama. He ran as getting us out of here, and getting us out of there, went to West Point. We didn't get out of anywhere, other than Iraq, and we didn't reduce troops. We transferred 'em. And then what happened getting out of Iraq? ISIS was created, necessitating us going to other places, which is one of the reasons why we're now in Syria.

No, it's all about Trump pulling us out of these wars. It threatens the military aspect of the deep state as much as anything else Trump is doing with the other realms contained within the deep state or the Washington establishment or what have you. The military people in this deep state have really been brilliant. They know that the American people for the most part, in a vast majority, instinctively support the troops. They know the American people instinctively adore and admire and support the troops. It's a volunteer force. They lay their lives on the line the moment they volunteer to join. 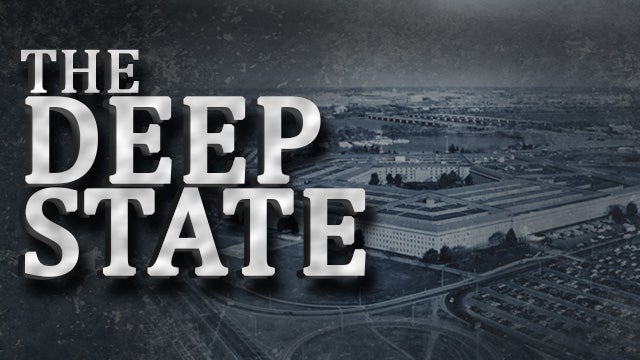 And so the people running the deep state military aspect of the Washington establishment have been taking advantage of this for longer than we can count. When you stop to think about this -- this is what Codevilla's piece did for me -- when you stop and think about it, it becomes even more outrageous. They count on us loving our soldiers, because we do. They count on us loving our country, because we do. And they count on most of us to unilaterally support the military, because we do. They even count on our Christianity as an aspect of promulgating and promoting certain aspects of foreign policy. The belief in Christianity that Israel, for example, is sacred. They take advantage of that too.

It's stunning when you stop to think about it. And they have used all of these good characteristics, they have used all of these really admirable traits that the American population have to prop up the military complex. The reason why it's surfacing now is Trump. Trump is exposing all of this. I can imagine some of you saying, "Wait a minute, Rush. You've been one of the biggest advocates of the military.” That's right I have for exactly these reasons that I have given you.

But all of a sudden here come these left-wing generals -- and it's not new -- but now we've got these left-wing generals popping up like McRaven, William McRaven writes a New York Times op-ed: It's time for a new person in the Oval Office. Republican, Democrat, or independent, the sooner, the better. Now he's joined the call for impeachment. He even advocated a coup, if necessary, in this New York Times piece!

Now, McRaven is well known to those of us who study well-known military people. He's a well-known, uber-leftist in the United States military. You want to talk about a conflict for me, that is a gigantic conflict. But as you know, we have two kinds of generals, two kinds of people in the military. We got warrior generals; we got political generals. McRaven's a political general in his current iteration. But these people are making it clear, folks, elections, if they don't go the way they want them, they're gonna overturn them! And they think they're perfectly entitled to! That's the thing.

These people with John Brennan and Clapper and all the rest, Hillary Clinton, who ran this operation while in cahoots with Russia, make no mistake about it, run this operation to get rid of Trump to overturn the election results. And it's ongoing now with Schiff and his stupid little, invisible, behind-the-scenes-in-the-basement committee.

Now, when you see these military people pop up after Syria, after pulling out 50 American troops, then it kind of, if you get jogged in the right direction, it all starts to become clear. So we've got a military guy here essentially in the New York Times advocating for Trump's impeachment even if it takes -- he doesn't use the word coup, but he makes it clear that getting rid of Trump is important at all costs.

Why? In their minds they're scared to death Trump is gonna get us out of these various foreign wars that we're in that have no end and have no U.S. national interest at stake. Something that, again, Democrats routinely every four years, every day, every year, however you want to quantify it, promise to do this all the time. They're known as the anti-war party. They do that to get votes from the pacifist aspect of their base, but it doesn't ever happen.

Who expanded Vietnam? That'd be JFK. Who got us out of Vietnam? Richard Nixon. What'd they do? They impeached him or came close. George W. Bush, War on Terror, they all supported that for two weeks, then the war in Iraq, ah, ah, not so sure, they said. The War on Terror involved Afghanistan.

Where are we still? Still in Afghanistan. Who promised to get us out of Afghanistan? Barack Hussein O. There's no end. Nobody can even tell you how it's gonna end. We don't even take the time to define victory and whatever the exit strategy would be. So it's an extensive piece. I'll be quoting from it later in the program. That sets the table on it.