RUSH: Here is Edward in Kernersville, North Carolina. Great to have you on the EIB Network. Hello.

CALLER: Hi. Mega dittos, Rush. I just wanted to let you know that you, sir, are my hero. I always take your advice. I deleted my Facebook, by the way, and I feel phenomenal.

RUSH: Well, thank you. I appreciate that.

CALLER: Yes, sir. My question is, how would these white liberals know how it is growing up in an urban community? I'm a 28-year-old Puerto Rican, and I grew up in Newark, New Jersey, all my life. There was a point in my life that I was scared to go outside in fear of getting mugged, beat up, but these white liberals never have. I mean, they have completely different picture of how it really is.

RUSH: Well, you know, it's a good question. How do these white women, college students...? How do they know anything about what it's actually like in African-American neighborhoods? They believe. Remember, this doesn't happen in one class. It doesn't happen in a week. This happens over the course of a semester, and then you add semesters to the first semester and it just keeps building on itself. 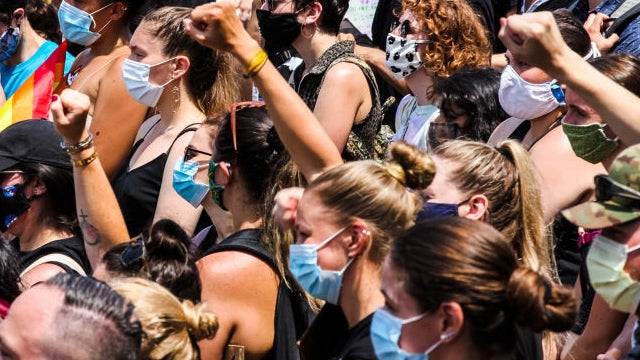 And they have the luxury of time. I mean, you go to school, you're gonna be in middle school for a couple years, high school for three, then they got you for four years in college. And they can double down, combine history and then whatever newfangled curriculum courses there are. They just... They wear people down over time.

But they know how to psychologically tap into the guilt centers. Let me ask. You just happened to provide me a great transition here to the piece de resistance from this whole subject matter today. Charles Love is the author of this piece. He is the assistant executive director of Seeking Educational Excellence," and this piece was adapted from a publication called City Journal.

The headline of the piece is, "What 'Woke' Whites Get Wrong About Blacks' Priorities," and let me share with you some fascinating pull quotes here 'cause they'll answer your question out there, Edward. "This month's protests started out as a black movement against police brutality, but they have a different look now. In many cases, whites have taken over" the protests, and that didn't take long. Six out of seven of the protesters...

Pew Research. Remember? I had it last week. Six out of seven of the protesters -- Black Lives Matter protesters -- are white, and the majority of them are white college educated women, suburban college-educated women. "They apologize for their 'white privilege'..." You ask: How do they know anything about African-Americans' standard of living? They're told that their existence, that their economic standard of living is because of white privilege.

It's because they have denied African-Americans. The country has denied African-Americans economic opportunity. They've literally stolen from 'em! Whatever they can lie about, they do. "They apologize for their 'white privilege'... Celebrities, athletes and corporate America followed suit. Portland's police chief resigned, asking to be replaced by a black man, and the CEO of Chick-fil-A urged whites to shine the shoes of black people to show a 'sense of shame.'

"But why now?" Mr. Love asks. "To find out, I had to hear what whites were saying. I listened to the protesters, talked with my white friends and read articles and social media posts. What I found was white people overwhelmingly depicting black people as desperate and defeated, with no way to pull themselves out of their misery."

Now, folks, I have to tell you that this is exactly the way the civil rights liberals all the way back to the fifties and sixties saw African-Americans and continue to see them to this day. "I ... talked with my white friends and read articles and social media posts. What I found was white people overwhelmingly depicting black people as desperate and defeated, with no way to pull themselves out of their misery."

"'I understand your point,' a white friend said when I objected to this simplistic narrative. 'But don't you think blacks are being oppressed?' That's when I realized that white wokeness is the new factor in our national life." Now, you know this because I've already explained it to you, but this guy just figured it out -- which is great, don't misunderstand.

"hite wokeness," particularly among affluent, female, white college students... "hite wokeness is the new factor in our national life. It has been embedded into the consciousness of whites that all blacks are the same and that they all face impossible barriers to improvement -- from standardized tests to the black men being arrested on the nightly news. A growing number of whites believe that black life is unrelentingly grim."

Now, my friends, this is precisely the view of Baby Boomer white liberals. You know what it's rooted in? It is rooted in the same... It's rooted in what I call "the soft bigotry of low expectations," and every white liberal is guilty of this. They look at African-Americans and they see people that have no chance. For whatever reason, they see people that just can't do it the way they can.

So they feel sorry for them, and then they turn that sympathy to blame on white conservatives, some group that's had nothing to do with any of this. But they can't blame themselves because they're "woke." These Baby Boomer white liberals, many of them in the media, can't be to blame because they get it. They are sensitive. But they believe that African-Americans don't have a prayer.

They believe African-Americans can't do things on their own. They have this guilt over what they believe slavery caused and how long slavery has lived. It's still alive in their view, and so all of this is really rooted in the sympathy that accompanies a belief that these people are incapable of helping themselves, that they're incompetent -- and, by the way, liberals look at everybody this way.

Liberals... This is what they've constructed in order to make themselves feel needed, in order to make themselves feel worthy of power. They damn well believe... Mr. Love is exactly right. He swerved into the truth here. Whites in college are being taught to believe that blacks are helpless, and they're helpless because they're perpetual, constant victims.

They're victims of an unfair, systemic racist America. They don't have a prayer. They can't possibly advance. And yet you point out many have, a whole bunch. There's an active African-American middle class -- and you point them out, you name them -- and, boy, do they hate you! Because those people are not independently sustainable. "Those are Uncle Toms. Those are sellouts and those are traitors who were never down for the struggle."

You can't point to them. Shelby Steele. One of the great points that Shelby Steele makes... Shelby Steele started out as a Malcolm X supporter. And he is frustrated beyond his ability to express it. Why in the world are the role models that African-American kids are told to look up to, people that go to jail, people have all...? You gotta be careful saying this stuff.

Let me do it another way: Why aren't people like Clarence Thomas held up as examples to follow, as heroes? And the answer is, "Because they weren't down for the struggle, 'cause they didn't use affirmative action, because they're nothing but a bunch of Stepin Fetchit blacks who do nothing but cultivate a bunch of white friends, and their white friends take care of them. They're sellouts to the race."

That's the thing that frustrates Shelby Steele out the wazoo, even though Shelby Steele doesn't talk that way. He doesn't say things like "out the wazoo," but I do. But, folks, it is rooted in sympathy. It's rooted in the belief that African-Americans can't do anything on their own, either because America is unfair or because the deck is so stacked against them.

So these African-Americans need white liberals looking out for them, shielding them and protecting them, and it adds up to the soft bigotry of low expectations. Meaning, "I don't think you've got what it takes, pal. Sorry! I just don't think you can make it." It's one of the most insulting attitudes you can have to anybody, regardless of race.

Mr. Love writes here, "Most whites don't have many black friends to give them firsthand accounts of what their experiences are with racism. While most blacks do experience some discrimination or racial prejudice, it is rarely violent, and it doesn't hold them back in a significant sense." In other words, it's a myth that, yet, everybody has been led to believe -- and Edward, here's the real answer to your question from Mr. Love.

"The media give a distorted view of black life. We see this in the stories they choose to report -- and those they . In 2018, police shot and killed 54 unarmed men; 22 were black," the rest were white. "Compared with the percentage of blacks in the U.S. population, that figure looks disproportionate -- but black people commit a disproportionate amount of violent crime and thus tend to have more interactions with the police."

You can't say that, see? Can't point that out. Something else you can't talk about is the black-on-black crime. No, no, no, no, no! You can't. Don't ever go there. They will come for you. But the bottom line here, Mr. Love says, "ost blacks don't live in poverty, don't have constant run-ins with law enforcement and aren't uneducated. It's important to look at racial disparities in context.

Then they come home' they start lecturing their parents.

Some of their parents do not want to lose the kids, so they make it look like they agree with them. Others actually do change their minds on key issues. I think the vast majority of it is parents not wanting to lose their kids. Look, I told you a couple weeks ago. I knew a new grandmother. She disagrees 1,000% with how her grandbabies are being raised, but can't say a word for fear she'll be shut out of their lives.

It's how it works.

About The Rush Limbaugh Show